Why Slack is my business application of 2016

If this is the time of year to look back on what’s happened in the subjects I’ve covered here, we need to talk about the business application of 2016: Slack. Claimed at one point as being “the fastest-growing workplace software application ever”, Slack is one of those ‘how-did-we-live-without-it’ services in many offices. It’s believed to have over 4 million daily active users worldwide (including our team here).

What Slack has done is to resurrect instant messaging from the technology grave, by making it easy to do, allowing private or group messages, and archiving everything for easy reference. Whether your team sit in the same office or are on opposite sides of the world, it keeps everyone in the loop better than anything I’ve used in my business career. And an entirely adequate version is 100% free.

I’m a member of a Slack group at work, a Slack group for a residents’ association and a Slack group for a local campaign where I live. In every case, it’s become the central communications hub for the organisation, and has allowed us to make faster and better decisions, as well as ensuring that everyone knows what’s going on.

At work, we use to Slack to discuss things in minutes, where before it might have taken days to throw documents around by email. But it’s not just speed: in the past, we might not have involved each other in certain discussions at all, just because it was such a chore. 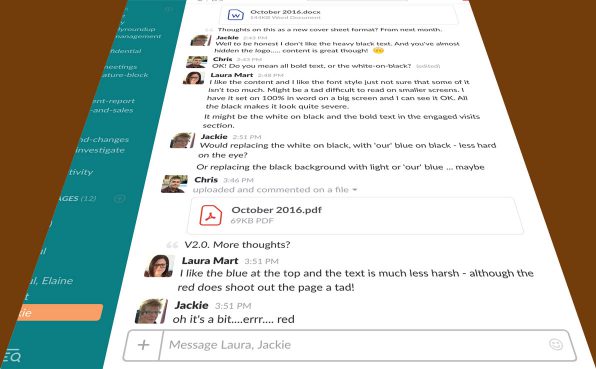 Slack is a great repository for documents too, or links to them. Despite my colleagues’ great efforts at creating accessible filing systems, I’m somebody who gets easily lost looking for stuff. Finding them by search, or in the context of a conversation, makes it much easier. The system integrates with other services too, so – for example – I get copies of anything going out on Mailchimp, and daily reports from Google Analytics. An easy to use, plain language ‘remind’ function in Slack has almost completely replaced my old to-do lists.

Best of all, Slack works on PCs and through a mobile app, synchronising perfectly between them, so you can check in and get notifications wherever and whenever you want. If you’re trying to manage a group who aren’t sitting around the same table for the whole of each working day, I would seriously recommend giving Slack a try.