The inevitable death of the classic AdWords ad

I’ve been asked by a couple of clients about the impact of the recent changes to Google’s search results layout, so I thought I’d report the results more widely. As you may have noticed, Google has ditched the adverts down the right hand side, and all the text adverts are now either above the search results or below them. Typically I’d expect to see 3 adverts at the top and 3 below, but it can be 0 to 4 at the top and 0 to 3 below.

The change has apparently been made to make the search results look similar across devices. Mobile screens have only had adverts at the top and bottom for a long time. Almost incredibly, Google claims that in many countries, more searches now come from smartphones than from desktop PCs and tablets combined. So in one respect, the change is just tidying things up. But they wouldn’t do it if it lost them money, of course.

It seems that the ads on the right were being clicked so infrequently that replacing all of them with just one or two more ads in the main left-hand column will see more clicks, and more revenue for Google. We found that adverts lower down on the right would often only achieve click-through rates of well under 1%, so I’m sure that’s true.

It does mean that on the search results at least, the classic AdWords advert format is now dead: 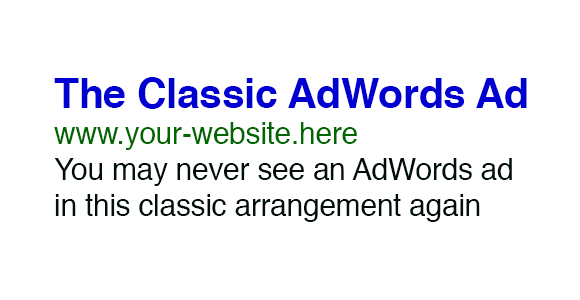 Instead, the two description lines underneath the headline will run as one line, or perhaps even be broken up so that the first description line gets brought into the headline. There are a lot of potential arrangements to consider, but this is something which experienced AdWords managers have been dealing with for a long time.

What of the results? We think – and analysts with more data than us agree – that the clickthrough rate is going up on ads in the first two positions, and staying about the same in the third position when there are three ads. However, on those searches where Google shows a fourth ad above the natural (free) search results, the third ad’s clickthrough rate drops, as it gets a bit lost.

With long-tail searches still growing in importance, good ‘SEO’ remains as crucial as ever. But increasingly the real action is in the paid-for spots at the top of the page.