Many clients who come to us to take over management of their Google AdWords campaigns, do so because they can’t keep up with the constant changes to AdWords. If you haven’t got the time to keep up, you can often waste a lot of money, or simply get unwanted results, possibly without your knowledge. A great example of this occurred recently, when we started to see some strange adverts appear for one of our clients. If you’re running your own campaign, this is a great example of one of those things …which might be happening unknown to you.

You’ll know that if you specify adverts to be run on the Display Network, they can appear on millions of third-party sites. The most common way to select these sites is to allow Google to find pages on relevant topics. If managed closely, this can be a very effective advertising outlet, and it’s a massive leap forward from booking ads on individual sites.

One of the types of adverts you can select is the simple “text ad”, just like those which appear on Google’s search results pages. You’d expect it to look like this:

For many years, that’s exactly what it did. But for some time now, Google has experimented with different ways of presenting the text in the ad, and on a lot of sites, you’ll find your text blown up to fill a larger space and be more prominent, like this: 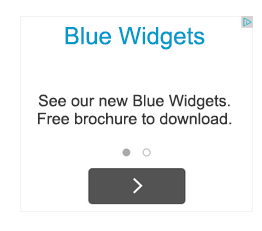 I’m sure nobody would be too upset about the more prominent display, although some of the fonts chosen have sat uncomfortably with corporate styles. Of more concern to the professional advertising campaign manager is that we’re not shown the different sizes and styles which have been used, and given the comparative data. It’s started to get a little out of our control.

This year, however, things have really started to become concerning, at least for those of us who do this for a living. I first noticed a new style of ad in March 2015, but could not find any announcement or discussion of this. The new, auto-generated ad now grabbed an image from the advertiser’s Google+ page (or at least that’s our educated guess) and tried to make up some sort of home-brewed image ad: 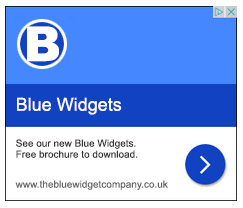 This had the potential to be something horrible, and indeed that’s how it turned out for one of our clients. The image grabbed was a logo, used wrongly, and the colours were nothing like the client’s corporate ones.

This experiment appears to be called “Rich Media Text Ads”, and for our client at least, it was a disaster. Fortunately, we were around to pursue the matter with Google itself, and as a result we’ve been shown a way to opt out of these ads.

Of greater concern, however, was the fact that these ads ran at all without our approval or consent. It turns out that the experiment was not even announced in public, as is normally the case. We would not even have known the ads were running, had we not spotted them ourselves. As a result, I have instigated a complaint with Google which might lead to better procedures in future. They’re being very helpful.

But it reinforces the need to be vigilant whenever you’re advertising online; unlike print, things can change.