Thanks for your response to the article earlier in the week discussing what our emails look like. We sailed past 100 completed surveys in no time at all, and here’s how things panned out.

Legal disclaimers and registered company details
It must be safe to say that long-winded legal disclaimers are becoming less commonplace. When they’re gone, we’ll all miss being told that “this email is intended for the person to whom it is addressed” and that “any views expressed are those of the sender”, I’m sure. But for now, the number of responders who said that their company emails still have legal disclaimers is…

On the assumption that use of the disclaimer is going down, you’re probably about to be in the minority if your company still uses them. It’s debatable as to whether they’re of any legal standing anyway. However, there’s a much better reason for getting rid of them, and it’s the fact that an increasing amount of email doesn’t go through the standard company system. We asked if an email from a smartphone had a disclaimer added at the bottom, and the answer was…

What about having company address and registration number details at the bottom? This is very different from (probably pointless) legal disclaimers, as it’s actually a legal requirement. So we all include it on every email, don’t we? Well, most of us do…

…but again, there’s a big discrepancy when it comes to smartphone emails. This, I suspect, needs to be addressed:

A hat-tip to the reader who pointed out that our daily emails didn’t have our company registration number at the bottom. They do now!

But apart from your name, what goes in it? The company website was the clear favourite, which I find a little surprising, only because I can recall quite a few occasions where I’ve had to look that one up! Job title, company phone number and company address are the other most common items. Slightly less popular, but still in most emails, are the your own direct phone number and email address, as well as, interestingly, the company logo. This is an item which needs to be used with care, as many people have images turned off by default in their emails, and it could make things messy for these people in certain email reading applications.

Company social media details are included in over a third of emails, but this is no more than the proportion which include a fax number, an item of office equipment which I recently tried unsuccessfully to describe to a young person who was working with me. I don’t think anyone’s asked me to send or receive a fax in the last ten years, but it looks like some people still use them. Definitely in a minority are company offers (possibly a wasted opportunity?), personal social media details (surprising: I’d have thought a LinkedIn link would be useful) and other images: 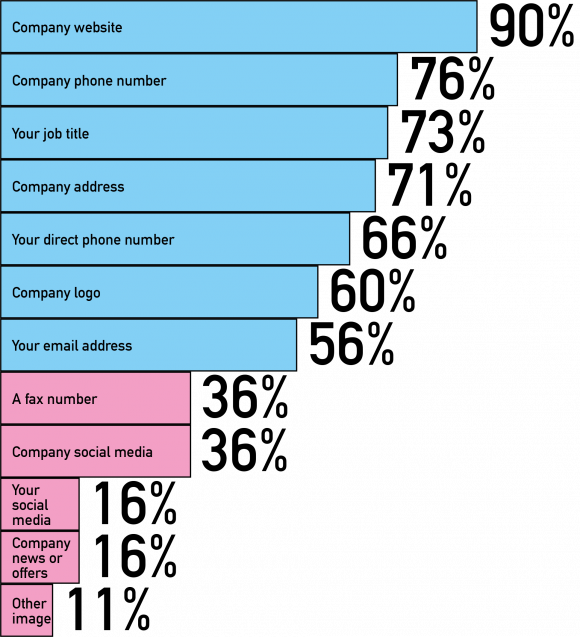 Starting and ending emails
While companies can automatically add a signature block, which may even have a built-in sign-off, how you start your emails is inevitably going to be done from scratch each time. The vast majority of respondents either use “Hi” or claim to change it on a per-email basis. I like to reflect back what the sender has used, but if I’m starting the conversation I rarely use anything other than “Hi”. Despite that, it does seem uncomfortably informal on occasions.

Ending an email offers you more choices, and more comfortable ones too. Forbes magazine reckons it could find 57 ways to do it. Despite that, over 60% of us choose to use one of the various forms of “Regards”, making it almost as much of a standard as “Hi”. 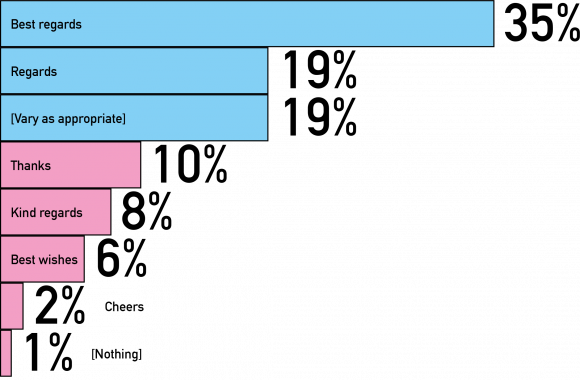 An article I read recently claimed that there’s a move towards using nothing at the end of an email. The trend-setting 1% who are already doing that, I salute you.