Where will my AdWords advert appear on the page?

Most of you will be running Google AdWords campaigns for your business, whether it’s in-house, through an advertising agency, or using a specialist company like BMON. It’s probably fair to assume, therefore, that you have a decent understanding of how AdWords works. However, I had a “Got to admit I didn’t know that” response from a client recently when describing some fairly fundamental stuff, and it reminded me never to take anything for granted. Of course, if you are well versed in how AdWords works, that also applies to you when discussing it with colleagues.

So I thought I’d drop in an occasional article on AdWords fundamentals, which you might find useful. Today: where will my advert appear on the search results page?

The position in which your advert appears is, of course, done on an auction basis. Bid the maximum amount you’re prepared to pay for a click on the advert, and you’ll appear below the competitors who’ve bid more, and above those who’ve bid less. If you want to appear higher up, bid a larger amount. Easy.

Sadly, however, it’s actually nothing like as simple as that.

The position of your advert is actually governed by something called “Ad Rank”. This is recalculated every time a search is made, and the bid is just one factor in this (although as you’d expect, the most important).

The other factors in Ad Rank are the “Quality Score” and the presentation of the adverts. The latter includes all the “extensions” you can include to make your advert stand out, and it’s a no-brainer to take advantage of these.

But what’s “Quality Score” all about? Well, this has three components. The first is the expected click-through rate. Obviously this starts off as an educated guess by Google, but quickly becomes based on historical data. The second is the relevance of the advert to the search query. Specify “red widgets” as a keyword which you’d like to trigger your ad for “blue widgets”, and Google will give you a low score for relevance. And the third component is the landing page quality: are you sending people to a page which is actually about red widgets, and has substantial content on it?

The reason for all this, Google tells us, is to give the “best possible experience for users”. Here’s a video of a very nice man from Google to back that up: 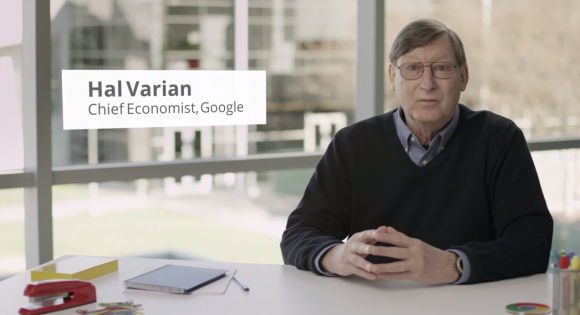 So, when your MD demands that your advert appears at the top of the page, the easiest way to do this is to increase the maximum cost-per-click. But don’t forget the rest of the equation, which is to ensure the ad is relevant to the search, that the landing page is relevant to both, and that you’ve decorated the ad with all the extensions you’re allowed. Yes, it’s a lot of work, but it’s worth it.