Yesterday I mentioned giving out AdWords tips here, so I should put my money where my big mouth is. Here’s a really simple one which can help your clickthrough rate a lot, but which I don’t see that many advertisers using. It comes into play when your advert is one of the two or three across the top of the page. In B2B advertising, that’s probably where most of us should be, because there aren’t that many searches around, and we need to be right there in people’s faces.

When you look at the adverts across the top of the page, you’ll see that some of them seem to have headlines which are more than twice as long as usual. That’s desirable, right? Here’s how it’s done.

The headline you specify for an AdWords ad has a limit of 25 characters. That’s to fit it in the column down the right hand side. In the slot across the top of the page, Google has more space to play with, and actually has three formats it can use. 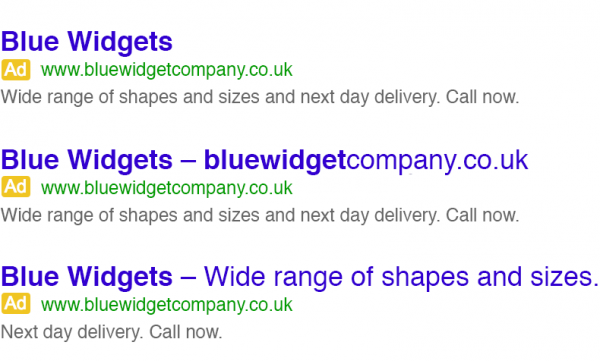 The first is just to copy the standard format: the headline, and underneath, the body text, run as a single line instead of two decks.

The second, which it will experiment with (and there’s nothing you can do to stop it), is the same, but with the addition of your domain after the headline.

The third, which you can encourage, is to bring up the first line of the body text into the headline. Now, clearly, if your body text was a single sentence, this would look daft, and Google knows this. But if your body text is two short sentences, the first could be split from the second.

So how do you tell Google that you’re happy for it to do this? Simply by using a full stop (other punctuation may work) at the end of the first line. Google will then put this version of the ad into the mix, and settle on the version (out of the three) which gets the best clickthrough rate. Unfortunately you can’t force it to use one particular version, but you can give it the option to try all three.