The importance of maintaining your LinkedIn profile page

LinkedIn continues to get more important, like it or not, and as it does so, it’s marching up the Google results. This gets it even more traffic, and one thing leads to another. I’ve been working really hard ever since search engines were invented to keep my own website as number one on Google locally for searches on my name, as (it would appear) has Chris Rand the sax player. But now we’re seriously under threat from LinkedIn results for our name. And the irritating thing about that? The example Google has picked to show is a different Chris Rand to both of us, and probably someone who hasn’t been trying to do well on Google at all. 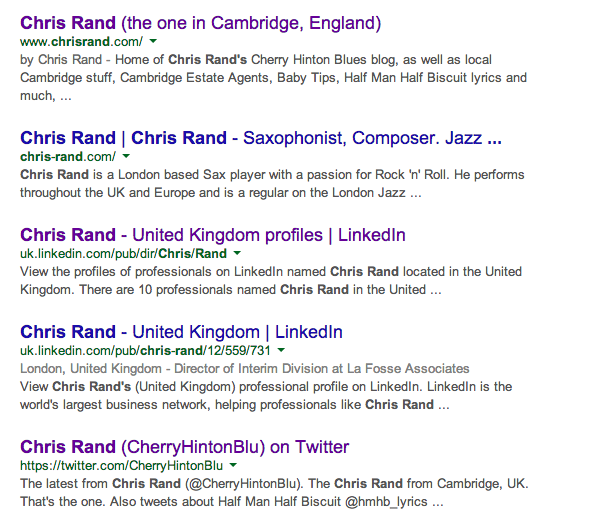 There are all sorts of reasons why somebody might type your name into Google, and many could be professionally advantageous. Maybe you’ve told somebody about a product you sell, and the main thing they could remember from the conversation was your name. Finding their way to your company website won’t be too hard for them, but there’s every possibility they might do so by searching for you on Google. If the first thing which comes up is your LinkedIn page, and they recognise what they see, they’ll click on that, even if it’s the products they’re ultimately after, not more information about you. That’s why it’s becoming increasingly important to ensure your page looks and reads as well as it can.

There are hundreds of good articles online about the best way to maintain your LinkedIn profile page, but here’s a good example which you might like to work through. Don’t underestimate how important a free page on a site often (mistakenly) associated with job-hunting can be.

1 thought on “The importance of maintaining your LinkedIn profile page”