Make your copywriting as interesting as your conversation

I know many people in marketing who converse interestingly, write attractive personal emails, and yet when it comes to a marketing document, only seem to write the most boring prose imaginable. I’m sure there are many reasons why, starting with a fear that their audience (or their boss) “expects” formality, and that formality means having all last traces of human emotion extracted.

It doesn’t need to be this way. Do you have a press release or a magazine article to write? Here’s a method of making your next piece of copywriting grab and keep your audience’s attention.

Firstly, go into Microsoft Word and hit “quit” or “exit”, or whatever it is on your PC. Go grab a nice text editor with a clutter-free screen option. There are loads available. I use Writeroom on the Mac: 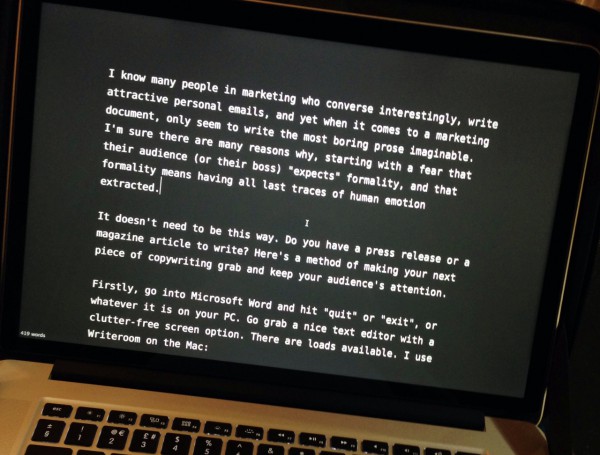 If your screen is covered in icons and ribbons and menu items, you’re going to be thinking about the presentation, not the content. Just eliminate that from the start.

Now get somebody to brief you verbally on what this piece of writing is about. Record them if you can, but one way or another, transcribe what they actually say. Ask them to sell you the benefits of the product, service or news that they’re talking about. Just get it all down, and think about editing it later. Editing is easy to do. But you need the content in the first place.

If there are nobody’s thoughts to transcribe, and all the content is in your head, then don’t start off by trying to write a press release or article. Instead, write an email to someone you know, outside of work, on the same subject (not one you’ll send, obviously). Your sister, perhaps, or the guy you go to football with. It’ll probably start something like: “Hi Paul. We’ve got a new blue widget in our range of products here which should worry the competition. It’s half the size of anyone else’s widget, which means our customers can get six of them in a cabinet and they’ll love that. Plus if it goes wrong, they can just unplug it and slip in a new unit in about 20 seconds.”

Don’t even think about the eventual press release or article. Just get the human version down. As you write, keep thinking about Paul, and his reaction to what you’re saying. Once you’ve got to the end, you’ll have something to work with, and however much you’re required to “formalise” it, the interesting, explanatory version will never be further than just under the surface.