The onward march of Google

“Watching Google change can quickly become an obsession”, wrote Dr. Peter J. Meyers recently in a post titled Future SERP: A Glimpse at Google 2014 which was published on The Moz Blog. And for some of us, I’ll admit it’s true. In the article, Meyers rounds up the changes he’s seen in recent months and projects forward to suggest a quite different look and feel to the Google results by this time next year. There are implications for your website design and certainly for your advertising, so the predictions are worth some thought.

For those of us in the technical sector, the majority of our prospects come via desktop PCs, although mobile and tablet use continues to grow. However, for a good idea of how Google results are likely to change on desktop PCs soon, just do a Google search on a tablet right now. Gone is the yellow AdWords panel at the top, and the whole page seems to be made out of modular blocks.

Cosmetic changes like this might not affect your Google traffic in an obvious way, but they might require some changes to the search engine optimisation techniques you employ, and you’ll certainly benefit from establishing your “brand” with Google in any way that you can. That big panel you sometimes see on the right, called the “knowledge graph” (and which many people wrongly assume is an advert), is going to become more widespread, I’m convinced. It’s another step towards the point where the Google results are no longer the gateway to sites, but replace them completely. Of course, we’ll all be increasingly furious the more Google does this, but it’s already happening. Try typing in the name of a current movie and your closest large town, and see what you get. Google has lifted the movie times, the map and the trailer from other sites so that you really don’t need to visit any of them. Indeed, it’s hard to do so (click on the cinema link – you don’t get taken to the cinema website any longer). 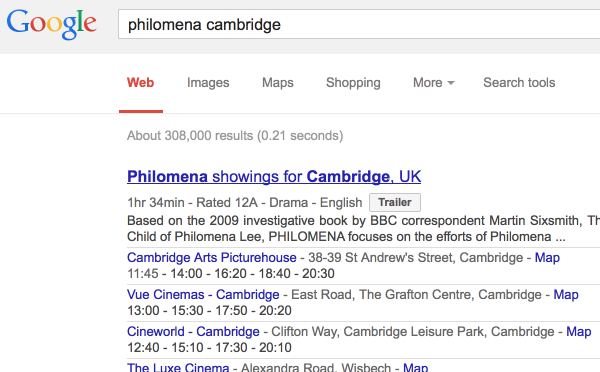 Peering further into the future, what Google is aiming at, I suspect, is for most organisations and businesses to just supply it with data which it can display in its own way, eliminating the need for users to visit the actual website. This might sound outrageous, but we may end up with no choice. If you don’t supply the data, they may just lift it from your site anyway, and who’s going to stop them?