Will we all be buying new domain names soon?

One of our readers got in touch the other day and said that her company had been offered the chance to book the website domain name of their dreams, thanks to some massive changes coming soon which will make the old “dot-coms” seem like old-hat. Was this something her company should be looking at? The answer is probably just to keep an eye on things.

Here’s what’s happening. Bear with me.

The last bit of a website domain name, the bit after the last dot, is called the “TLD” (top-level domain). These divide into “gTLD” (generic) and “ccTLD” (country) types. So “.com” and “.net” would be gTLDs, while “.uk” and “.de” are ccTLDs. Some country TLD administrators, including the uk one, have a further level of classification, so “.uk” is always prefixed by “.co”, “.ac”, etc.

Most people only know about half a dozen gTLDs, such as .com, .net and .org, but there are more than 20, including such rarely-spotted ones as .museum. There are over 200 ccTLDs, with a couple trying to pretend they’re gTLDs, like .tv and .co.

Still with me? Good. What’s happening now is that ICANN, the body that oversees the structure of the internet, is going to allow a thousand or more new TLDs, if there’s a market demand. But it doesn’t mean you can just make up your own and register it for ten pounds a year, like you do with your .com or .co.uk. Each TLD is run by a single company, which then sells the registrations. The process is hugely expensive to set up and maintain, so it’s only because of the massive volume of .com and .co.uk domains that registration can be so affordable. The only new TLDs which are likely to be introduced are those which operators think they can sell in enough volume to make a profit. Alternatively, if I’m reading this correctly, I guess it’s possible that some multinational might have deep enough pockets to buy one for itself, giving us the prospect of domain names as simple as cambridge.mcdonalds, which would be a cool, if expensive exercise.

At the moment, you’re probably likely to be getting emails saying “let us know what you might be interested in”, followed by a huge list of intriguing suggestions. But there’s no guarantee these will actually be launched; everyone’s trying to find out what might be worth investing in. There are apparently about 10 million new domain name registrations per year; only a fraction will use the new TLDs, and divided across 1,000 different ones doesn’t leave much of a customer base from which to break even. 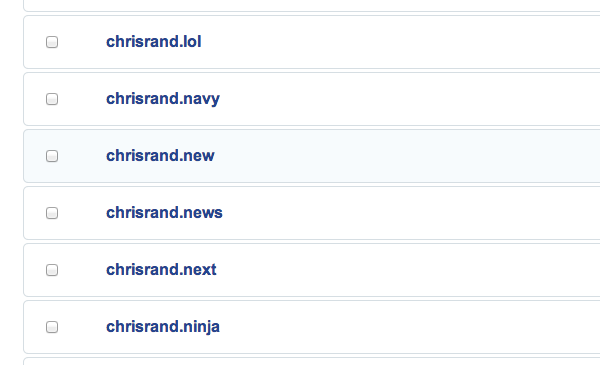 I can’t visualise many companies “transferring” domains for a long time. Even if you did like the idea of a simpler domain name, you would keep the old domain on and redirect it, rather than ditch it, so the new name is an additional expense.

Generally, however, it’s another step down the line in the simplification of website addresses. As users of online services such as Twitter or Facebook, we’re used to having simple usernames to identify our account. The unwieldy nature of website domain names might be heaving itself in the same direction. What was http://www.bluewidgetcompany.co.uk in 1995 and has been shortened to bluewidgetcompany.co.uk in 2005, might become just bluewidget.company in 2015. Maybe.

1 thought on “Will we all be buying new domain names soon?”