An interesting “one rule for you” debate has been running for a while with respect to the way Google displays its results. Last year, Google stated that it would downgrade websites which showed largely ads at first glance, and which required scrolling down to get to the real content. Ads, it would seem, aren’t “content”.

OK, fair enough. But what about Google’s results pages? As we all know, for many generic product searches, it’s not uncommon to see almost nothing but ads, without scrolling. A best, you might see a solitary “natural search” entry at the bottom of the page: 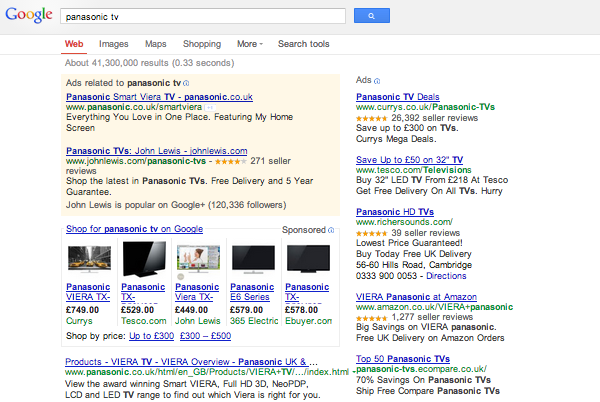 Many people, stung by this iniquity, have suggested that Google gets its own house in order. But I disagree. Google isn’t a “content” site, it’s an index. And in many cases, people are better served by ads than by random links.

Take another look at the page above. If you’d just typed in “panasonic tv”, my guess is that you either wanted some information from the Panasonic website about its TVs, or you wanted to buy one. And that’s exactly what Google’s providing. The natural search result at the bottom of the page is the Panasonic website. And the ads which surround it are the places to buy your TV.

Suppliers cry foul because they’re getting so much less traffic from the free natural search results. Gone are the days when they could get to the top of the page by spending a few pounds on “SEO”. Now they have to advertise, at a cost, to be the first name people see. However, the winners from this arrangement are either side of the chain. Google wins because its gets the advertising revenue (and why shouldn’t it?). And I’d argue that the customers win, because if they want to buy a TV, they’d rather see the ads from the retailers actively selling them, than they would a list of retailers randomly ordered by Google, which is what we used to get.

If you want to be at the top of the Google results nowadays, you’re going to have to pay for the privilege. But in return, you get to craft your own message. And the results can prove to be a very good investment indeed.