Search term “(not provided)” – what does it mean?

The vast majority of our Google AdWords management clients have Google Analytics on their website, and as well as setting this up to measure their Google AdWords campaign performance each month, we take the opportunity to provide other reports on their website visitor numbers. We like to help out our clients in any way we can. One of the reports which many companies ask for, and find interesting – quite understandably – is the “keyword report”, which shows what terms their visitors from search engines actually typed in to find them. I discussed this report recently when explaining how to take out the branded (e.g company name) traffic from that report.

Anyone who looks at that data can’t have failed to notice the appearance over the last couple of years of an entry called “(not provided)”. For my personal website over the last month, this represented 2,999 out of 8,907 visits from search engines. Ouch. 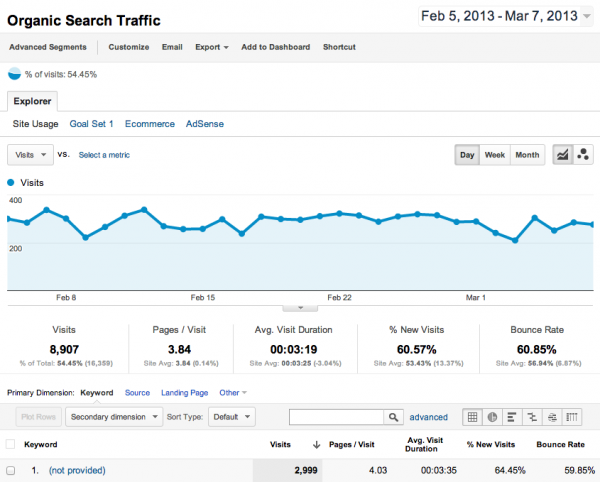 So what is this “(not provided)”? It began two years ago, when Google recognised that users who are signed in to Google services (maybe because you use GMail or Google+) are no longer anonymous to Google. In an effort to allay fears that third parties might be able to track searches back to the individual making them, Google announced that it was encrypting searches from identifiable individuals. The search data would not be passed on to other services, and therefore would no longer be available to Google Analytics. This concept has since been taken up as default in various browsers, with the result that instead of it only affecting a small number of visits, as originally claimed by Google, we’re seeing the numbers shown above. And they’re getting larger.

What does this mean for us as website owners? It means that although search engine optimisation remains important, we’re getting increasingly less data with which to analyse the traffic coming from search engines. Those who are proficient in Google Analytics and wish to investigate the “(not provided)” data can do so using various techniques, as the great Avinash Kaushik explains on his Occam’s Razor blog. But in general, we’re increasingly going to be groping in the dark on this one.