One thing which most engineering and scientific companies can’t get away from on their websites is tabular data. Unfortunately that’s also something which can be slightly irritating to produce in HTML, the code behind web pages. Most web design applications cope with creating tables well, but the way they appear on the page can be haphazard and slightly unpredictable. Some content management systems, including WordPress, don’t really support tables at all, although there are some decent plug-ins which help.

However, there is a solution. Create the table in any application you’re comfortable with, such as Microsoft Word, and save it as an image. Some applications will export to a suitable image format, such as JPEG, GIF or PNG, directly. Others might need to go via a PDF and Photoshop. A screen shot turns out to be possibly the simplest technique of all. Here’s one I did that way, lifted from one of our own brochures and now presented as a PNG format image file online:

Why using BMON makes Google AdWords so much easier 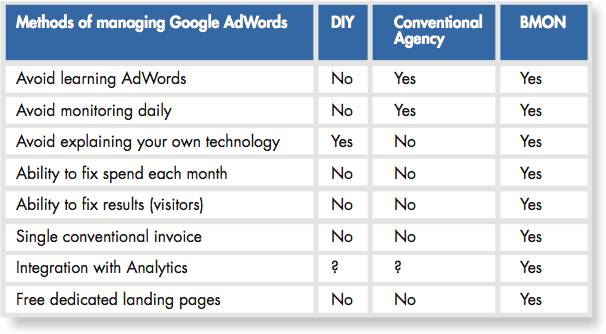 I’m sure you’ll agree that looks as good (if not better) than any table made in HTML on a web page. Now, some of you might be thinking: “But we shouldn’t put text in images, because the search engines can’t ‘read’ images, right?” And that’s true. However, I would argue that there’s rarely anything inside a table which people might be searching for, especially if the contents are largely numerical, which may be the case for you. So it doesn’t really matter if the search engines don’t pick up on the contents of the table. The stuff you’ll want appearing in Google will all be in the descriptive text on the page.