Are you using the potential of video? [SEO Wednesdays]

I was really pleased last week to see that something which I’d boldly claimed in these emails could happen, actually was doing so. What was it? Vaulting to the top of the results in Google simply by making a video about the subject. As many of you might have noted, here at BMON we’re offering an extremely low-cost video production service for those of you who want to create videos as frequently as one a week, but who are pressed for time and just want to “order and forget”. One of the first companies to take us up on the offer was Air Control Industries, and one of the first videos we made for them was about a product called the JetBlack blow-off cleaning station.

Now, it’s acknowledged in the world of search engine optimisation that videos are getting a spectacular amount of prominence in Google’s results at the moment. While you wouldn’t expect a video to jump to the top of the page for “hotels in London” or something ridiculously competitive like that, none of us are involved in those sorts of markets, fortunately. For Air Control Industries, with this particular video we targeted the term “blow-off cleaning stations”. We made a short one-minute video from a brochure and an idea supplied by the company, and here’s the result I’m seeing as I write this: 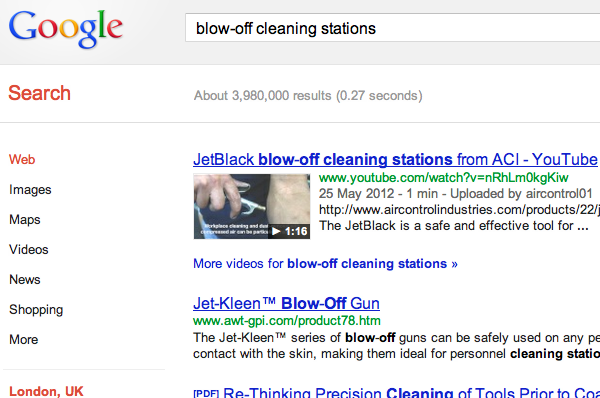 I’m not going to claim this will happen for everything, and it’s only part of the reason for creating videos. In addition, they liven up your website immensely, and they get a message over to a certain group of people very effectively. Creating a “YouTube Channel” for your company is a huge marketing asset which will work for years to come. But if you make enough videos, you will occasionally hit the bullseye on Google, and for that alone, it can offer a tremendous return on investment. For more information on BMON’s One Minute Video production service, have a read of this.

3 thoughts on “Are you using the potential of video? [SEO Wednesdays]”