Do you have to be quite so stuffy?

For so many companies, there’s always been a mismatch between the impression given to prospects by marketing and sales. On one hand, there’s the marketing department, always watching their backs and trying to please too many people, and consequently projecting an image which is almost certainly too stuffy and remote. On the other hand, there’s the field sales team, constantly trying to be their prospects’ best mates. The most effective pieces of marketing literature I’ve ever been involved with, at least as far as the sales team have been concerned, are those which are genuinely helpful to their prospects. And don’t get me started on advertising: most salespeople look at their own company’s advertising and wonder why it has to be that boring. The people they’re trying to sell to certainly aren’t that pompous.

Online, marketing has had the opportunity to be a bit less formal, and I know many examples where it’s really helped the sales story. Most marketing managers are still way too scared of what the MD might think to be anything other than humourless in their publicity, but an increasing number are starting to dress down a bit.

Blogs have helped in this respect. As I mentioned a few days ago, the key to standing out in a market is to differentiate yourself from the competition, not to follow them. One company which has never been scared of that is PVL, the East Sussex-based distributor of switches and sensors. We helped PVL set up its blog a couple of years ago, but we had no idea of what they were going to do with it. To me, the blog looks like it’s being aimed squarely at keeping existing and former customers in touch with what the company has to offer, and it just screams: “remember, we’re a fun bunch of approachable people, who can help you out with decent products”. Just the image any good sales team would want to project, in fact.

Take a look at the entry from last week, for example (click on the image below). All of PVL’s blog entries are emailed out to their mailing list automatically, and when the latest email came through, I almost knew it was going to be about the Titanic. Of course it was. The point here though wasn’t just that I opened the email (and goodness knows I don’t even open most company’s emails) but that I was looking forward to what they had to say. Looking forward to an email from an engineering company as I opened it!

Apparently the PVL blog is produced in-house but with the help and encouragement of its extremely switched-on PR consultancy. If you can outsource some (or even all) of a project like this, there’s even less excuse for not doing it. Why let the stuffiest link in your company always dictate how you present yourself? Your sales team aren’t like that, and your customers aren’t either. Surely they’re the people who really matter? 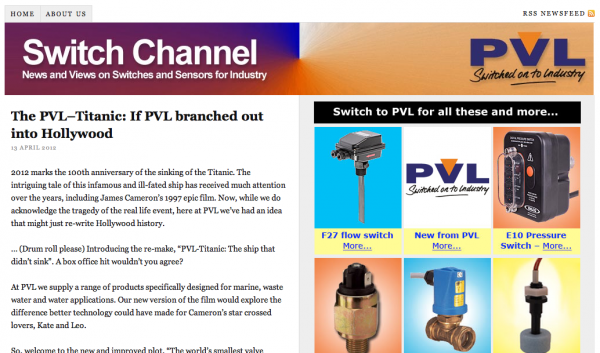