Now you can see what Google thinks of your server speed

I’ve often argued with companies about the speed of their websites; I point out, gently, that things are a little on the slow side, and they disagree. But the reason is probably that they’re viewing the site from a browser (perhaps in the office) which has visited the site five minutes earlier and has all of the images and scripts in memory. Anyway, that’s all irrelevant now, because as of today, Google is giving you a whole lot of independent site speed data from within Google Analytics. You’ll need the new version of Google Analytics running (just click the link at the top of the page), and the site speed data is found under “Content” on the left. It’s very useful.

What’s an acceptable page load time? For human users, I remember some research from a couple of years ago which showed that 40% will abandon a web page if it takes more than three seconds to load. However, as long as they can see the “above the fold” stuff in that time (i.e the screen area available without scrolling), then it’s not so important if the stuff down the bottom takes longer. I doubt that Google and other non-human visitors will be so tolerant, and Google has made it quite clear that fast page loading time is now a serious factor in giving you better search engine rankings. You might like to play around with sites like Which Loads Faster? to get a good demonstration of how your site compares. If you’re not performing well, it’s something your company seriously needs to look at. Quality, fast web servers aren’t expensive, and moving to one shouldn’t be too difficult. 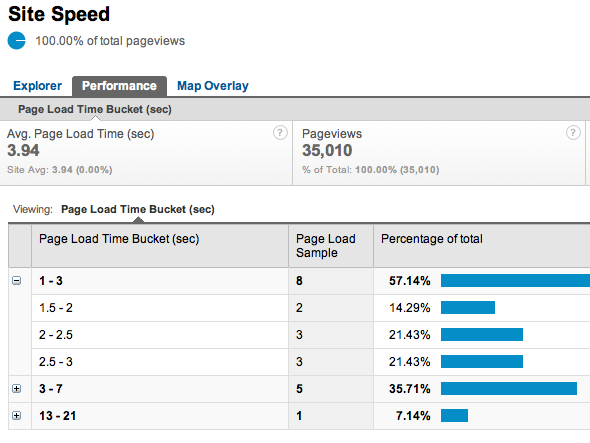