Real-time website analytics from Google – is it any use?

You may have read that Google Analytics is rolling out some “real time” features soon, showing you data about what’s happening on your website at that moment, rather than just aggregating the data up to a point a few hours ago. That sounds quite cool, but in reality, is it something which the average industrial or scientific business can use? After all, the screenshot which Google has shown us looks intriguing: 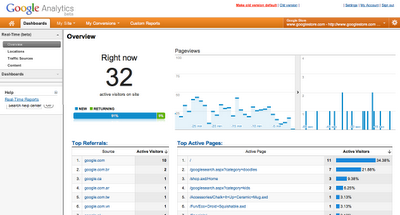 While it’s certainly a bit of fun to see how many people are on your website at any one time, I’m not sure what serious use it’s going to be in reality. Great for big consumer businesses which can see what their latest Twitter buzz is bringing to the website, but perhaps not that useful for the rest of us. Note also that it only shows a snapshot in time, you won’t see the numbers going up and down as you watch.

However, I can see one use for it, a use which demonstrates the difference between what we have to put up with in day-to-day business and the wonderful online worlds which big B2C companies (and their consultants) inhabit. It’s a use which shouldn’t exist in 2011, but it does, and it’s demonstrating to the skeptical MD or Sales Director that the website really is much more important than any other marketing asset. I still come across people who think that the £20,000 exhibition stand which sees 10 prospects an hour for three days a year needs more investment than the website, which has 4 or 5 prospects on it continuously, 365 days a year. Maybe this data might help them see what’s really going on.