Promotional pages which work quietly in the background

I was reading an article the other day about how landing pages for specific marketing campaigns can actually deliver results months or even years after the period for which they were initially designed. For example, let’s say you set up a landing page to offer a catalogue or brochure, to tie in with a one-off mailshot. You’ll see a surge of visits to the page, and requests, as the mailshot is received, and then the response will understandably dwindle to nothing. But here’s the thing: other resources (such as Google) will link to the page, and it’s not uncommon to find that, over time, a steady trickle of people will be visiting the page who were nothing to do with the original promotion.

One of our AdWords clients is a good example. Last year, we set up a series of landing pages to run in conjunction with various adverts promoting different products. After a few months, we dropped one of the product adverts – mainly to free up the budget to try others – but found that the response continued to come in from the landing page. It had started to rank reasonably well in Google for a specific search which appeared in the page copy. Although the enquiries weren’t overwhelming, they’ve continued for nearly a year now, and if anything are increasing. If you value a brochure request at, say, £50, the landing page has easily been worth a four-figure sum to the company since its perceived lifetime ended.

I wonder if a microsite of separate promotional pages for all of your company’s brochures might work? Any competent website designer could set it up, or if you’re one of our Insider Programme members, you can use our brilliant Landing Page Generator, and we’d handle all of the electronic deliveries and the data handling for free. An example of a page created with our Landing Page Generator is shown below.

Supposing you had, let’s say 20 brochures, and setting up a promotional page for each took, say, half an hour. In less than a couple of days (and it’d be a great job for an intern) you could set up a microsite on our server and who knows what it might generate? If each page produced just one enquiry a month, that’d be over 200 brochure requests a year. What else would you have to do to generate 200 brochure requests? Buy the front cover of your favourite trade magazine every month for a year? Build the biggest exhibition stand you’ve ever done? Saturate every website you can think of with banner ads? 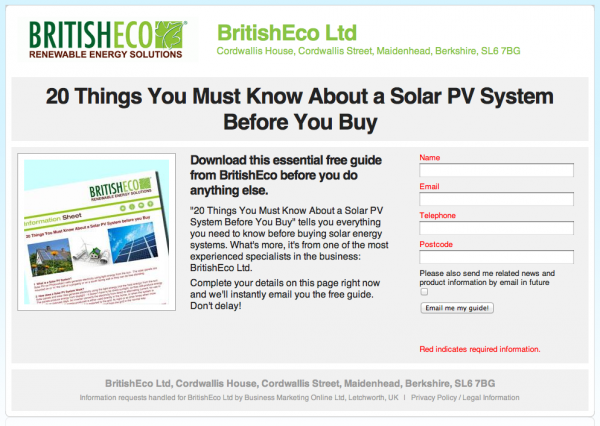