Excluding your own company from Google Analytics – an update

Last year I discussed Excluding your own company from Google Analytics and I know a lot of you did this. It’s certainly something I’d recommend. Here are some updates, however. Firstly, I did write that to have Google Analytics ignore accesses from your site, you needed to find out your “IP address”, and enter it into Google Analytics in a rather odd format called a “regular expression”, which is enough to put most people off. Those of you who took the plunge may have found out that this was soon out of date: it’s now simple to enter your IP address, exactly as it is. Here’s what the new form looks like: 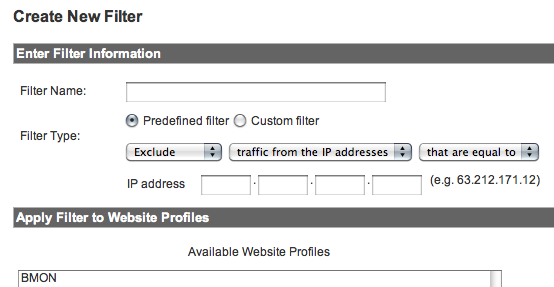 That’s the encouraging piece of feedback. The other one, however, came from a reader who is fortunate enough to have an IT Manager in-house. Now don’t get me wrong, IT people who know more than I do (and that’s just about all of them) have got me out of no end of difficulties in the past, and for that I thank them. But a good one should be seen and not heard. Being disallowed from doing quite straightforward things on a PC at a company “because we have an IT policy against that” has been one of the biggest pains in my working life over the years. The “policy” is often there [1] to avoid unwanted occurrences which it’s almost impossible to ever envisage happening, or [2] to cover an eventuality which became impossible due to technological developments years ago.