If the Panda can’t hurt me, why should I care?

I mentioned the forthcoming Google update the other day, and was asked by a reader which sites it is going to impact, and if that will have a knock-on effect. A news story at CNN explains things well, and highlights where Google may have not got it right yet, but it’s clear which types of sites may be affected, and they may well be sites which you advertise on. Now, if the advertising is pay-per-click (e.g Google AdWords) or even pay-per-impression, that’s not so important, because you only pay for what you get. But for flat-rate advertising contract sites – i.e. those which charge a fixed amount to run your banner ads each month – a big hit in traffic would be a killer. It’s critical that you carefully study the response from such advertising over the next few months, because none of these sites are going to be rushing to tell you that their traffic has been halved overnight. For Insider Programme members running Google Analytics, we’re quite happy to sort out a free report for you on your inbound traffic sources and their relative values and merit: just ask.

Meanwhile, as has been pointed out, although the Google “Panda” update is only live in the USA, any site can see if it’s likely to be affected by checking its traffic from Google in the USA over the last few months. If your site has been adversely hit (and it’s unlikely for a corporate site), then you’ll see a big drop in visitors from that source. This site hasn’t, as you can see: 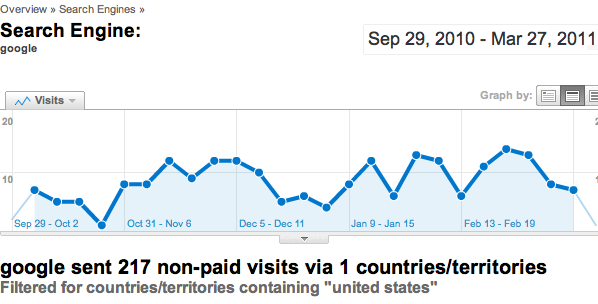