The results of our “Where are you advertising next year?” poll

Press release relating to this article

[Welcome Industrial Automation Insider readers! If you like this article, you can sign up to receive similar one every morning for free here]

I promised you the results of our “Where are you advertising next year?” poll within a few days, and here we go. Firstly, a huge thank-you to everyone who took part. The results below were compiled from the first 183 companies to respond, although one or two more have added their entries to the list in the couple of days since. So I think that although not statistically bombproof, it’s a poll which has a lot of substance.

What do we find? The full results are in the table below. Firstly, there’s a clear winner. Email marketing is going to be the most important area of investment for industrial and scientific companies next year. Over 80% said it was going to be “high” or “medium” priority, and only 3% said they wouldn’t be using it at all. That stirs some mixed emotions here, because my colleagues and I set up Pro-Talk in 1999 as an email marketing service for industrial and scientific companies, before quickly realising the web was where it was all going to be happening. Maybe we were just ahead of our time.

I’ll take that on board though when it comes to deciding what to write about here next year.

The other area where the effort and budget is heading is Google AdWords. We’re encouraged by that, because here at Business Marketing Online, we’ve already decided to focus our services on Google AdWords management in 2011. The poll shows that almost three-quarters of you are going to be giving this uniquely twenty-first century advertising method “high” or “medium” priority next year. For those of you who don’t want to take on its steep learning curve and time-consuming monitoring in-house, we’ll be here to help.

The other four advertising channels we put in the poll all fare disappointingly. Well, I say “disappointingly”, but in one case I don’t mean it. Paid-For Editorial is being given “low” or “no” priority by over 70% of you, which I’m thrilled about. As a former trade magazine editor, I know how much this awful practice from greedy publishers has steadily eroded the credibility – and subsequent effectiveness – of the trade press over the past twenty years. Maybe it’s too late for trade magazines to stage a renaissance, but we live in hope that it isn’t. The state of the magazine market might also explain why an astonishing 54% of you are decreasing your investment in print display advertising next year, and 28% will be doing none at all. That’s going to hurt.

Based on all the figures, I gave each advertising option a mark out of ten. Now, I’m not suggesting that it’s always a good idea to follow the herd, but a lot of contemporaries of yours will have put plenty of thought and experience into what they’re doing next year, and I don’t think you’ll go far wrong if you use these figures as an indicator of which way the wind is blowing. 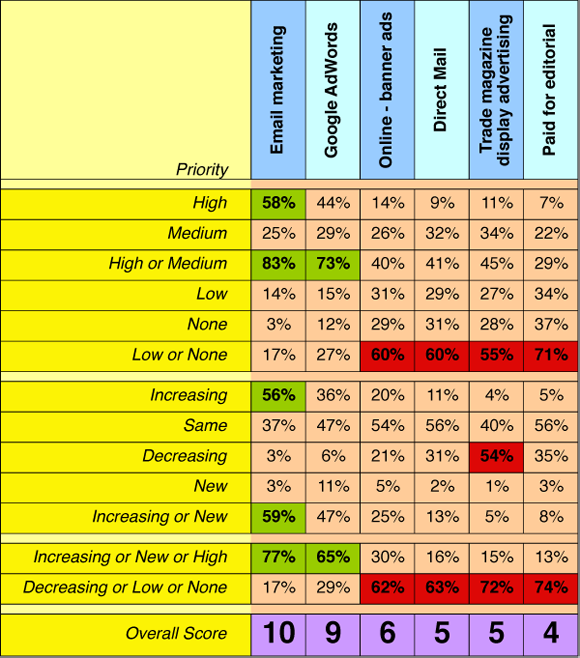 Press release relating to this article