Dominate your own Google results

More changes in the Google results; I should make this a weekly feature. Anyway, back in August Google announced that for a certain class of query, where the search engine seems sure that the first result is nearly always the one which the searcher is after, it would show more than the traditional “two results, one indented” from that site. This provoked a lot of discussion, but the experiment was obviously a success, because on Thursday Google extended the feature to cover more searches. Now it’s quite likely, especially for brand-based searches, that you’ll see the same site quoted as the first four results in Google. If the site is also ranked highly enough to get those two columns of “sitelinks” within its result, and even its own search box, it’s unlikely a searcher will ever see anything else on the page.

You don’t have to be Coca-Cola to get results like this. Even industrial and scientific companies can find they’re now in this enviable position. I could quote Renishaw or SKF as examples. What impact will it have? Well, if you’re not the top result for your company, perhaps because there’s a similarly-named one, or because a parent company’s website comes above yours, it’s not good news at all. Perhaps it might be time to rebrand yourself a bit more strongly with the part of your company name (e.g the “UK” bit!) which differentiates you from the company appearing above you.

Also, if you’re lucky enough to get all these extra results, it might be worth noting that the description text which appears is often only one line, rather than two, so you might wish to re-write your description meta tags so they work in both formats. Have fun. 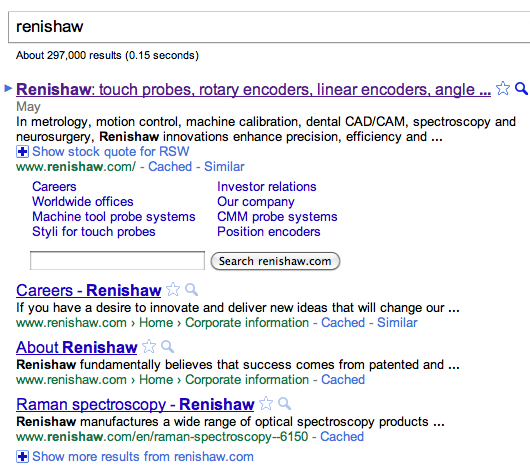