We put our customers first. After ourselves.

I was recently working with a client on a website, and I was told that a senior manager would like to change a visitor response form we were using. Responders were given a single box in which to type their name, and a single text area in which to type their address. The client, however, wanted the name to be split into “surname” and “first name” fields, and the address area to be split into separate fields for “street”, “town”, “postcode” etc. 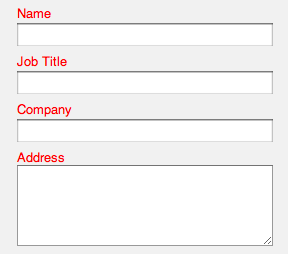 I was interested to follow up the reason for this, because it was my understanding that minimising the number of fields, as we’d done, made it easier for visitors to complete the form. One field for me to type in “Chris Rand” quickly is preferable to having to type “Chris” into one box and “Rand” into a second one, especially as you never know which is coming first – forename or surname – and it all just forces visitors to engage their brain a little more.

Perhaps the client had access to some research which contradicted my assumption? That would be excellent. Or maybe they genuinely felt it would be more aesthetically pleasing without affecting usability? I was keen to find out.

You may see this coming, but the reason the client wanted the change was because his customer database worked that way, and he wanted to be able to transfer the data more easily. That’s right: whose lives is it more important to make easier: the customers’, or the company’s admin staff?

It might have been a justifiable trade-off if the company had been dealing with hundreds of requests an hour, but it was an industrial company expecting one or two enquiries a day. I wondered if this tiny request, sorted out in a moment, was perhaps symptomatic of a problem in the organisation. Someone there wasn’t worried about inconveniencing customers he would never meet, but was worried about making the office admin manager have to think.

And it was, of course, a company which says: “we put our customers first”. Don’t they all?

3 thoughts on “We put our customers first. After ourselves.”