Why an app is better than an application

Yesterday I looked at how a simple screenful of applications would be a better way for PCs to work. What would that mean?

Well, each of these applications runs in their own little world. When an app is launched, the computer becomes a dedicated device for that purpose. It throws away thirty years of PC development, which has been organised around a prominent operating system (such as Windows) keeping as many plates spinning as possible, and often failing to do so. Applications on a PC today are all designed to match the operating system style, and are all fatally compromised in their usability by doing so. Apps on a mobile device are designed to do what they do in the most efficient way possible, with only minimal deference to other apps, and the operating system.

Let’s take a random “app” on the iPhone, such as Facebook’s, and compare it with the PC. On the iPhone, you touch the app to start it. You then have a screen of icons representing what you might want to do next (news feed, inbox, requests, etc). And when you go to any of these, the interface is dedicated to that function, and a joy to use.

Meanwhile, on the PC, you fire up a browser and are presented with a screen full of inconsistent options which are only usable because we’ve grown up with this stuff. And that’s before you look at all the drop-down menus across the top of the screen which your browser gives you. It’s quite frightening in comparison.

Tomorrow we’ll see why the future of computing might be app-shaped. 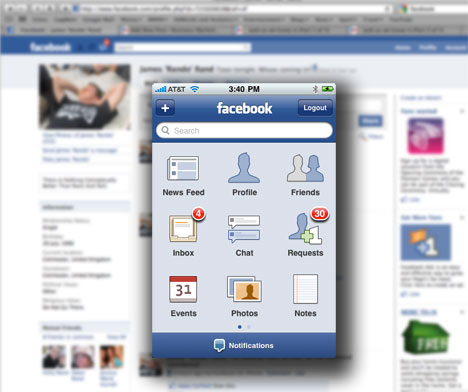 2 thoughts on “Why an app is better than an application”